From the Kii.ngaay Publication Article – 2015 A year in review

Committed to improving Watchmen living conditions: the new cabin at SGang Gwaay, wood sheds at all Watchmen sites and a new helicopter pad to accommodate the BC Air Ambulance at SGang Gwaay all built thanks to the Archipelago Management Board.

Watchmen and visitors to SGang Gwaay have a lot to celebrate this year; namely, the completion of a beautiful new Watchmen cabin nestled into the shoreline. Completed as of early November, the cabin will be unveiled in the spring of 2016.

The new cabin was built by Highlander Marine Services, a local Haida-owned contractor who won the competitive bidding process last year. Their crew started demolition of the old cabin in November 2014. By early May 2015 Highlander completed archaeological checks and started construction. The new cabin is larger and wider than the previous one, but was built on top of the original footprint to minimize environmental impact. It was designed to accommodate up to three watchmen at one of the busiest sites in all of Gwaii Haanas and represents a significant upgrade from the tents the volunteer Watchmen stayed in during the early 1980’s.

The project generated employment for up to nine locals. Building a cabin in such a remote setting as SGang Gwaay presented many unique challenges. Supplies were sent in by barge or plane and workers had to live away from home for months at a time. A big Haaw’a to Taan Forest for providing four monumental cedars to form the corner posts that will hold this beautiful and functional building for decades to come and to Highlander Marine Services for a job well done. 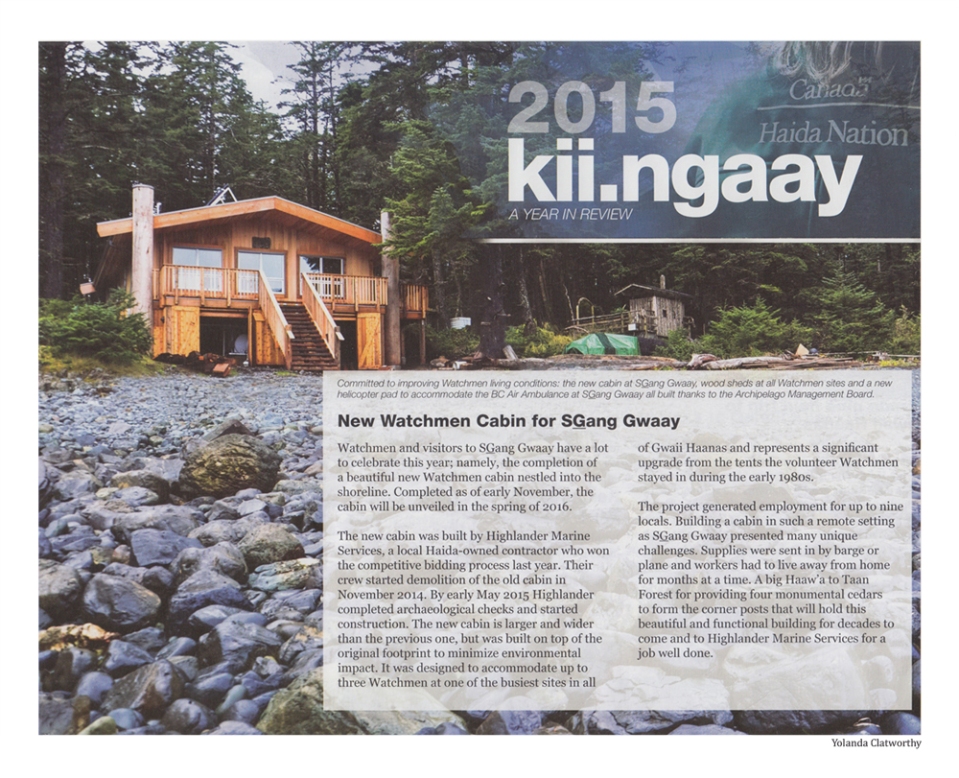 Mark Yaroshuk was instrumental in the construction of the cabin at SGang Gwaay. He worked hard to bring this project to completion, from it’s conception. The time Mark spent on this project was well over a year, and the time he spent shows in the finished product. With his experience and history, he was the best pick to undertake this project to build a longhouse style living structure as a Watchmen Cabin. Highlander Marine Services provided transportation of supplies to the site and took care of the logistics, and Mark was the builder of the longhouse, along with his helpers.    – Unanimous

Blog at WordPress.com. | The Designfolio Theme by Press Coders